California’s community colleges are implementing new policies in developmental (or remedial) education that could improve completion of transfer-level courses for tens of thousands of students every year. Recently passed legislation should result in the vast majority of entering community college students bypassing developmental education and enrolling directly into transfer-level courses in English and math. Many of these students will be provided with concurrent remedial support to help them succeed—namely, co-requisite courses, which feature group work to reinforce difficult concepts, just-in-time remediation, and other activities.

The new policies will be implemented systemwide by fall of 2019, but some colleges began offering co-requisite courses ahead of schedule—as early as 2015–16. Implementation has been faster in English than math: as of 2017–18, 33 of the state’s 115 community colleges were offering English co-requisites, while only 16 offered math co-requisites. This is not surprising, considering that co-requisite support in math must be tailored to the transfer-level courses required for different majors (e.g., statistics, business calculus, pre-calculus, college algebra, math for liberal arts). Between 2016–17 and 2017–18, enrollment in English co-requisites more than doubled (to 8,200), while enrollment in math co-requisites increased 36% (to 1,300). 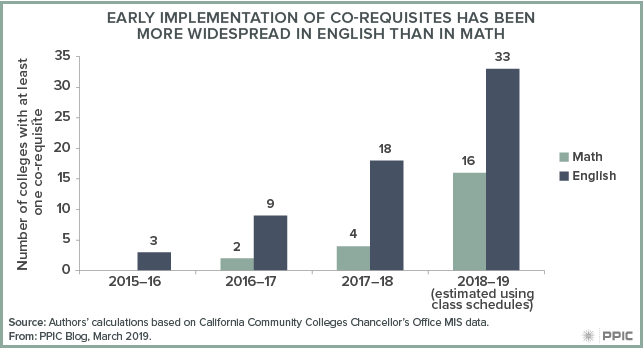 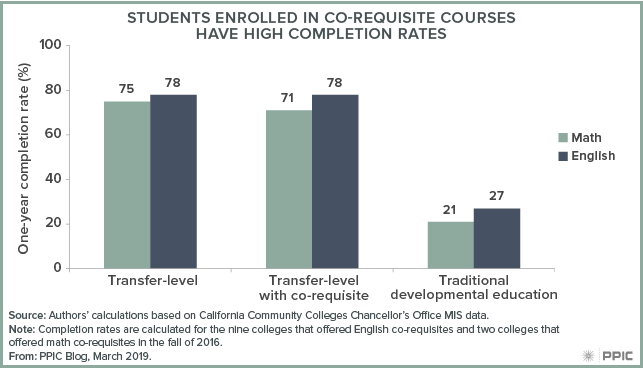 The early evidence on co-requisites is promising. As colleges move into the full implementation phase, ongoing research can help them understand what happens as they broaden access to transfer-level courses to a diverse group of students, what types of concurrent support work best, and how co-requisite students perform in subsequent college-level courses.